Endowed Professorships Open Up Opportunities For University Of North Alabama

FLORENCE, Ala.-A string of endowed professorships are setting the University of North Alabama up for years of future success.

With these two welcome additions, the University of North Alabama currently boasts 10 endowed professorships. While that is impressive, Dr. Ross Alexander, UNA VPAA and Provost, said he'd certainly like to see more.

"We'd be honored and excited to have additional opportunities," Alexander said. "All endowed professorships give us latitude and flexibility to recruit the best and brightest faculty candidates nationally and internationally and also incentivize productive, high-performing faculty members to stay for their entire career. They allow us to be competitive with our aspirational peer institutions," he said.

And that is what makes the endowed professorships that much more important. Without the worry of money, these professorships enable faculty members to support research and other scholarly creative activities, disseminate scholarly work through publications and other national international forums, and serve as a resource person in their respective discipline.

Dean Carmen Burkhalter oversees the UNA College of Arts and Sciences, which is home to half of the endowed professorships on campus; she said she sees the benefit of the endowments as a way to highlight the excellent scholarship faculty engage in.

"Endowed professorships allow us to reward faculty who are already on campus but they also allow us opportunities to recruit full-time or visiting faculty who have expertise in content areas important to our curriculum," she said. "They are however, difficult to obtain and we are pleased with the diligence of Barbie Terry, as the College of Arts and Sciences' Development Officer, in pairing our needs with the passions of our generous supporters."

It's up to the University's fundraisers, like Terry, to find the right people who are able to afford the $250,000 required to start an endowed professorship at UNA. But that's exactly what they've done with the addition of the recent Huckaba endowed professorships, and hopefully there are more to come in the future.

For more information on endowed gifts at UNA:https://una.edu/campaign/ 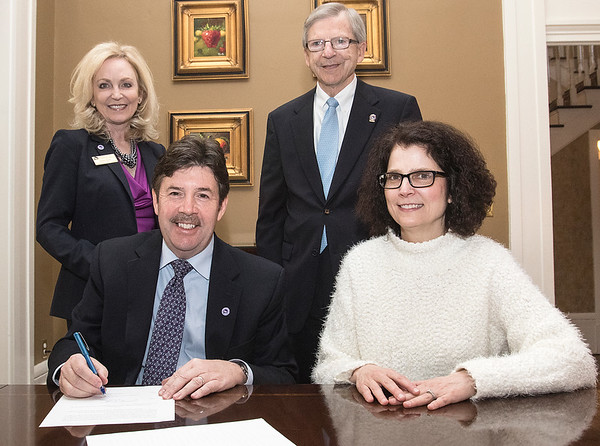 More photos can be found on UNA's SmugMug account here.

The University of North Alabama is an accredited, comprehensive regional state university offering undergraduate and graduate degree programsthrough the colleges of Arts and Sciences, Business,Education and Human Sciences, and the Anderson College of Nursing.Occupying a 130-acre campus in a residential section of Florence, Alabama, UNA is located within a four-city area that also includes Tuscumbia, Sheffield and Muscle Shoals. UNA also operates arenownedcollegiate athletic program in NCAA Division II's Gulf South Conference.The University of North Alabama is an equal opportunity institution and does not discriminate in the admission policy on the basis of race, color, sex, religion, disability, age or national origin.