FLORENCE, Ala.-Dr. Eric Kirkman '97, University of North Alabama alumnus and current Sheffield Junior High principal, will soon be at the helm as the new director of Kilby Laboratory School.

Kirkman will replace Dr. Chris James June 1. James, who has served as the Kilby director for three years, was recently named associate professor in the UNA College of Education.

Kirkman has spent the last 19 years in education and said he looks at this new position as an opportunity to maximize his talents.

"This position is great, because not only am I getting to work with school-age students, but college students as well," said Kirkman. "I now get to engage all facets of my passions as I work with young students and aspiring educators alike. This will all be accomplished at my Alma Mater, which has done so much for me and my career as an educator and active community member."

Kirkman said first steps will include becoming familiar with the current Kilby budget and academic programs, the schedule and what resources will be at his disposal.

"From there, I want to tap into the stakeholdersand get their input regarding some goals for the upcoming year. I desire to have my finger on the pulse of the school culture and then plan accordingly," he said.

Kirkman said he also has some changes in mind as well.

"I would like to make some cosmetic changes to the building to add some school colors and 'UNA Spirit' to the Kilby campus, he said. "I also wouldlike to establish a leadership council out of the student body to not only serve as the 'student council' for the school, but to also serve as student ambassadors.

Kirkman said he plans to use the oversight and proximity to UNA as a way to reach outto the University to create opportunities for Kilby students to engage in service activities as they learn more about the various departments and colleges on campus.

"I want to connect Kilby to the University as much as possible and the community," Kirkman said. 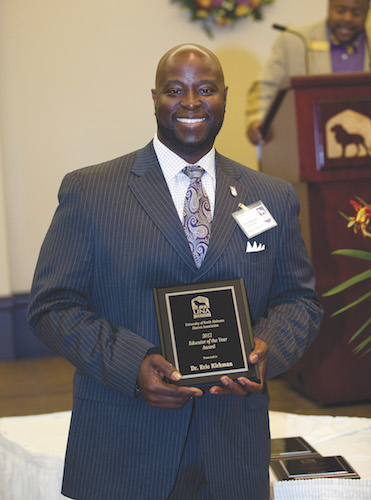