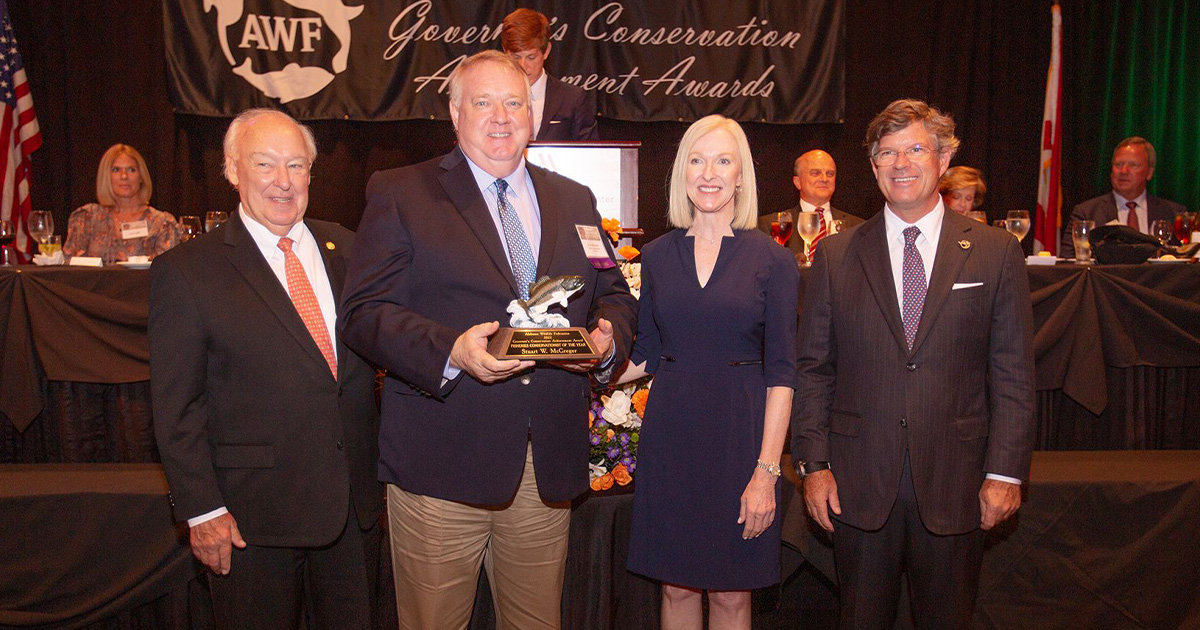 University of North Alabama graduate Stuart McGregor has been named the Fisheries Conservationist of the Year in a ceremony that took place at the annual Governor’s Conservation Achievement Awards Ceremony. McGregor was one of several to receive an award from among different conservation-focused professions. Recipients are selected from a pool of candidates nominated from citizens or colleagues who recognize the contributions of the awardees.

McGregor was one of several individuals to win an award highlighting not only his conservation efforts but his leadership in his respective field. Each winner, McGregor included, excelled in raising awareness of wildlife and for providing outstanding contributions to the natural resource welfare of their community and their state.

“Receiving the award reinforces my confidence that my efforts and those of my colleagues in our field – including my educators and supervisors past and present, my staff, the host of dedicated professionals with whom I work to protect the resources, and the interested public – appreciate and recognize the important work we do,” McGregor said.

For the past 34 years, McGregor has published articles in peer-reviewed scientific journals and popular media outlets. Most recently, he served as the co-author of Crayfishes of Alabama. The book, published by the University of Alabama press, is an exhaustive assessment of the rich crayfish fauna found in Alabama, and McGregor said he believes the publication was “the ultimate deciding factor” in him receiving the award.

When not writing and winning conservation awards, McGregor is an aquatic biologist and the Director of the Ecosystems Investigations Program at the Geological Survey of Alabama at the University of Alabama.

“I most enjoy the field work related to finding important members of our state’s diverse aquatic resources, identifying the issues that may present threats to those resources, and publishing reports so that responsible parties can put into place the proper procedures to ameliorate the threats,” he said.

McGregor graduated from UNA in 1984 with a Bachelor of Arts and a double major in History and Environmental Biology. He said his faculty mentors were among what set him on his career trajectory.

“A host of caring, dedicated professors nurtured the importance of proper scientific methods and offered assistance and friendship long after I left UNA,” he said. “Of particular note was the late Dr. Paul Yokley, who specialized in freshwater mussels, the same group to which the majority of my career has been dedicated, and Dr. Jack Brown, who strongly emphasized accuracy in scientific methods and presentation of facts.”

Making the public aware of what he and his colleagues do as part of their daily roles as conservationists is vital to McGregor.

“While the overall condition of many of our resources have improved due to effective programs, such as the Endangered Species Act, the Clean Water Act, the Clean Air Act, and other state and federal programs, we have by no means resolved all the issues that continue to threaten their continued existence, affecting the quality of life for the citizens of the state,” he said.

For McGregor, the journey has only just begun, and he is looking ahead at the work that remains to be done within his chosen field, both educating and creating change.