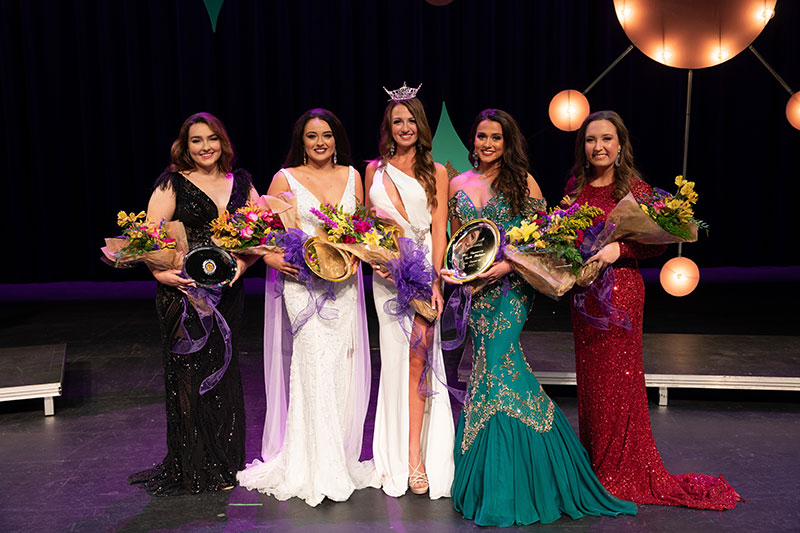 Hendrickson will move on to compete for the title of Miss Alabama. Hendrickson is a mass communication major, and she performed a dance, “You Can’t Stop the Beat,” for the talent portion of the program.

Miss UNA will receive a one-year tuition scholarship as well as a Miss UNA Custom Designed Ring, provided by Creative Jewelers in downtown Florence. Amelia Tucker, of Chelsea, was the winner of an amethyst necklace for receiving the most Facebook votes for her custom ring design.

The Miss UNA program is an official preliminary for the Miss Alabama and Miss America events. The program provides an opportunity for contestants to compete for scholarship funding and prizes. The program has been in place at UNA since 1974; since that time, three Miss UNA winners have gone on to win Miss Alabama and compete in the Miss America program.

The University of North Alabama is an accredited, comprehensive regional state university offering undergraduate, graduate, and doctoral degree programs through the colleges of Arts, Sciences, and Engineering; Business and Technology; Education and Human Sciences; and the Anderson College of Nursing and Health Professions. Occupying a 130-acre campus in a residential section of Florence, Alabama, UNA is located within a four-city area that also includes Muscle Shoals, Sheffield, and Tuscumbia. UNA Athletics, a renowned collegiate athletics program with seven (7) Division II National Championships, is now a proud member of the NCAA Division I’s ASUN and Big South conferences. The University of North Alabama is an equal opportunity institution and does not discriminate in the admission policy on the basis of race, color, sex, religion, disability, age, or national origin. For more: www.una.edu and www.una.edu/unaworks/.