FLORENCE, Ala.- University of North Alabama alumna Anne Clem Whitaker '89 is the newest member of the University's Board of Trustees.Whitaker, a Decatur native who now resides in Morrisville, North Carolina, was appointed to the position Tuesday. 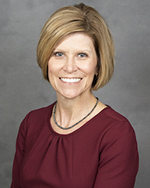 "I am grateful that UNA and its professors provided me with a strong scientific background and leadership foundation that has served me well in my career in healthcare," said Whitaker.

"I am honored and thrilled to be joining the board and have a chance to give back to the University. I look forward to working with the other trustees, UNA's staff and local industry to provide a strong educational foundation for the current and future students of UNA through both on campus, and modern digital programs and experiences," she said.

Whitaker earned a degree in Chemistry and Business at UNA in 1989. She is currently managing partner of Anne Whitaker Group, LLC, a private health care consulting and professional services firm she founded and is located in Cary, North Carolina.

She is active in advising a portfolio of healthcare and technology companies across North America and Europe. Whitaker previously served as theCEO and President of Novoclem Therapeutics, Inc., now Vast Therapeutics, and KNOWBio, LLC, both privately held, early-stage biopharmaceutical companies where she was a founding CEO and Director.

A seasoned biopharmaceutical executive with more than 25 years of leadership, product commercialization, business and corporate development across multiple companies and geographies, Whitaker currently serves as an independent director on the boards of Cree, (CREE: NASDAQ), a leading global semiconductor company; Mallinckrodt (MNK:NYSE), a specialty pharmaceutical company; and Vectura Group (VEC:GB London Exchange), a pharmaceutical and medical device company. Whitaker is also a member of the University of North Alabama Foundation Board of Directors.

Whitaker's appointment comes after a bill supported by UNA was passed during this spring's legislative session that removed the State Superintendent of Education as an ex-officio board member and replaced that position with a new at-large voting member from within, or outside the state.

The Governor signed that bill into law, effective May 1. Therefore, the UNA Board now consists of 11 voting members - 10 gubernatorial appointees and the Governor as ex-officio.

Whitaker plans to join the UNA Board of Trustees at the next meeting June 13.